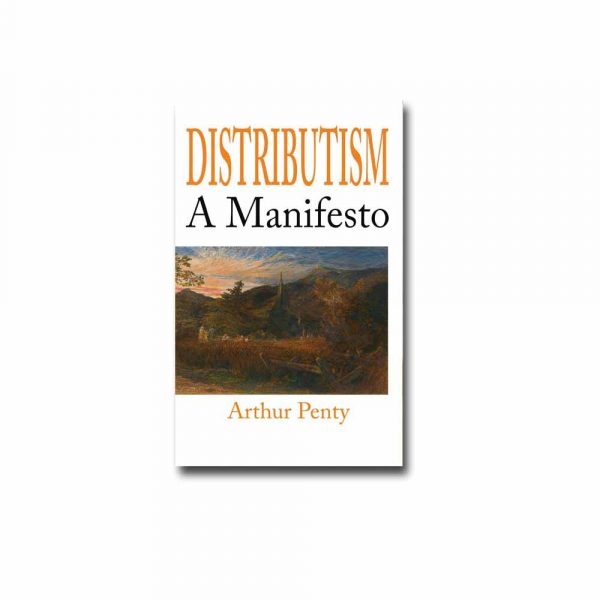 Distributism: A Manifesto is also available from Amazon and as a kindle edition. It is available on epub and pdf (later this month). You can also buy it as part of a special deal including the companion volume to this one, David Boyle’s Back to the Land: Distributism and the Politics of Life!

Who were the Distributists? Most people will not, I’m afraid, have even heard of them, almost a century after their rise and fall. But in some ways, they are Sussex’s contribution to political economy.

It was the Sussex writer Hilaire Belloc who provided the ideological firepower, and it was the Ditchling crafts guild that provided a practical laboratory to put the idea – and their slogan Three Acres and a Cow – into practice.

Distributism was a non-party-political movement that grew up in the 1920s and 1930s, dedicated to small-scale mass ownership of land and property as a bastion against collectivism, big business and big institutions, which its founders believed led inevitably to slavery.

Distributism flourished under the early leadership of former Liberals Belloc and G. K. Chesterton, became associated with radical Catholicism and arts and crafts pioneers like Eric Gill, and disintegrated in the 1940s – but was later influential on key Liberal Party policy-makers in the 1950s and green economics pioneers in the 1970s.

The immediate influences on Distributism included Belloc’s book The Servile State (1912), and the prolific journalism of G. K. Chesterton (1874–1936). According to its proponents, it was an economic doctrine, but much of what they wrote was also historical criticism and profoundly spiritual. It also drew from Roman Catholic social doctrine, the political radicalism of Cardinal Henry Manning and Pope Leo XIII’s encyclical Rerum Novarum (1891), which first propagated the idea – at the heart of Distributism – of ‘subsidiarity’.

Also perhaps the English agrarian campaigners in the tradition of William Cobbett and Jesse Collings MP, a supporter of Joseph Chamberlain, who first coined the Three Acres and a Cow watchword (in the USA, the equivalent was Forty Acres and a Mule!).

Distributism borrowed from the arts and crafts movement’s critique of industrialism and the ideas of John Ruskin, William Morris and the great lost English radical tradition of Back to the Land. Distributists tended to be vague about what they were campaigning for. At heart, the movement was a critique of prevailing state socialism, industrialisation and monopolistic commercial-ism.

They proposed the widespread distribution of land and property and looked forward to a revival of the values of small-scale agriculture and crafts, which they regarded as an urgent bastion to defend the human spirit – and Distributism was overwhelmingly a spiritual creed – against the slavery or corporatism of right or left.

They were more obviously influential on the prevailing culture, with the founding of the Distributist crafts community in Ditchling in Sussex, and were undoubtedly an influence which fed into the post-war English romantic revival.

When the influential book Small is Beautiful was published in 1973, author E. F. Schumacher included a critical chapter entitled ‘Chestertonian Economics’ which had a major influence on the emerging field of green economics. There was also an unacknowledged influence on some of the more radical aspects of Thatcherism, including the 1979 decision to sell council houses to their tenants (but not her failure to replace them!).

There may also, arguably, be deeper and more pervasive influences on modern journalism, building on the original influence of the Distributist J. B. Morton (Beachcomber) and his associates on the concerns of the popular press – for individuals against the big institutions – which is often dismissed as populism.

It is hardly surprising that some aspects of their campaign requires defending in the modern world, but so much was also potentially important too. This would have been helped if they could have produced more definitive work.

But although Chesterton’s collection of essays was published as An Outline of Sanity to coincide with the launch of the Distributist League in 1926, his long awaited Distributist manifesto never actually emerged. After he died in 1936, the League asked the guild socialist Arthur Penty – a supporter – to write one. It was published in 1937, with a note by the League’s secretary Hilary Pepler from Ditchling:

“This Manifesto was almost the last work of Arthur Penty; he offered it to the League for publication, giving me authority to correct any statements which might inadvertently conflict with our accepted principles…”

If you felt this note implies some nervousness, and perhaps some division in the Distributist ranks, at that stage, you would be right. Events in Europe were coming to a head, and although the Distributist leaders were united against Hitler, the Spanish Civil War seriously divided them.

Reading today, Penty’s manifesto retains much of its uncompromising freshness. You might not agree with him about modernism – though his critique probably does still apply to the so-called International Style. You might not understand his sideswipes at the other prominent economic heresy of the age – C. H. Douglas’s social credit – but there is enough in here to provide a glimpse of a powerful idea which has never gone away, but keeps reinventing itself, generation after generation.

If you would like to know more about the tradition, history and possible future of the Distributists – then I would like to recommend my book Back to the Land, published at the same time as this one (see below).

Distributism: A Manifesto is also available from Amazon and as a kindle edition. It is available on epub and pdf (later this month). You can also buy it as part of a special deal including the companion volume to this one, David Boyle’s Back to the Land: Distributism and the Politics of Life!