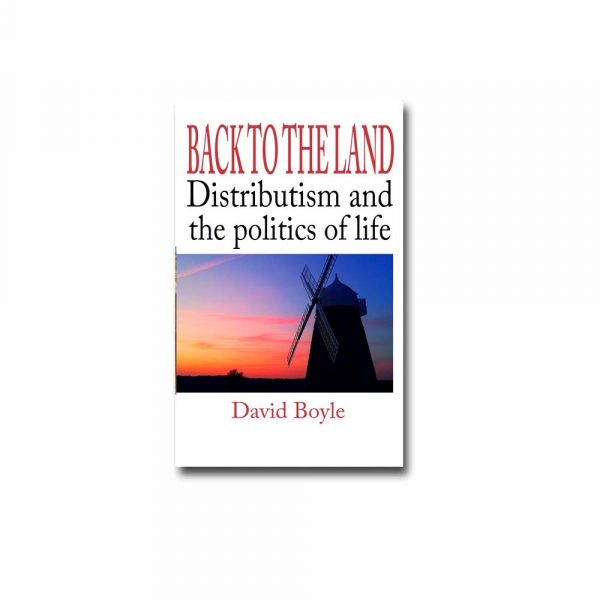 BACK TO THE LAND BY DAVID BOYLE (print)

“Spirits that call and no one answers;
Ha’nacker’s down and England’s done.
Wind and Thistle for pipe and dancers
And never a ploughman under the Sun.
Never a ploughman. Never a one.”(The final verse of Hilaire Belloc’s poem ‘Ha’nacker Mill’)

Belloc, G. K. Chesterton and the Ditching arts and crafts community developed a political ideology in the 1920s. It was male-dominated, melancholic and atavistic, but it has had widespread power and influence.Distributism is largely forgotten, but it was widely understood in its day, when it bundled up a spiritual approach to life and work, small-scale land ownership and back-to-the-land.

David Boyle’s lively introduction looks back at the story of the Distributists, and the back-to-the-land tradition they sprang from – and takes the tale on to see if it might be reinvented today, when the rise of allotments and the renewed power of women in back-to-the-land makes Distributist thinking potentially relevant again.

Back to the Land: Distributism and the Politics of Life is also available from Amazon and as a kindle edition. It is available on epub and pdf (later this month). You can also buy it as part of a special deal including the companion volume to this one, Arthur Penty’s Distributism: A Manifesto. Watch this space!