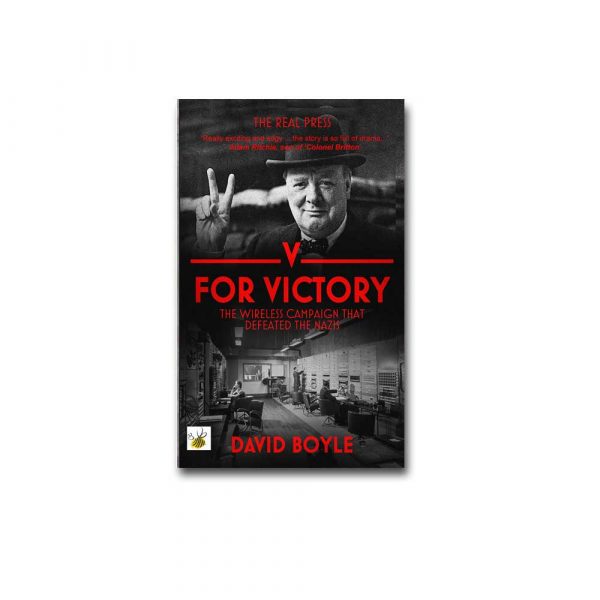 “Really exciting and edgy … the story is so full of drama…” Adam Ritchie, son of ‘Colonel Britton’

The extraordinary, untold story of the greatest piece of radio propaganda ever created – the V for Victory campaign – designed to shape a sense of resistance to Nazi rule in occupied Europe. It was propaganda made by amateurs but was so successful that Churchill and de Gaulle both adopted the V sign, and Goebbels had to hit back with his own V campaign.

The book also explains how it was the BBC, without reference to higher authority, rejected Hitler’s peace offer of July 1940, immediately and insultingly – to the horror of both the British and German foreign offices.

At the start of 1941, Britain stood alone and a great silence fell over occupied Europe. What were they thinking? Did they want to resist? Nobody knew – nor did they know how to build up the confidence of the occupied peoples so that, one day, they might want to fight back. The result was an extraordinary radio campaign, broadcast from London, and led by a man known to the world as ‘Colonel Britton’.

The V campaign caught the imagination of people around the world. It gave Churchill and de Gaulle their hand gestures. It inflamed what was already an almighty propaganda battle over the airwaves. But it was also furiously controversial in London, as rival government departments struggled to assert control over broadcasts to occupied Europe.

This book tells the amazing story of how a radio campaign was able to shape resistance to the Nazis, and how and why – for a brief moment in time – Britain spoke fearlessly, passionately and positively to Europe.

“It seems strange now, looking back, that there was a time when the BBC – or an organisation paid for by the BBC – spoke to the people of Europe in this way. It seems even stranger that it gave them instructions in subversion and incited them to sabotage. There were parts of the establishment which never forgave this, and parts of the BBC too, but the legacy remains with us…”

You can buy this as an ebook for Kindle here and as a paperback here.