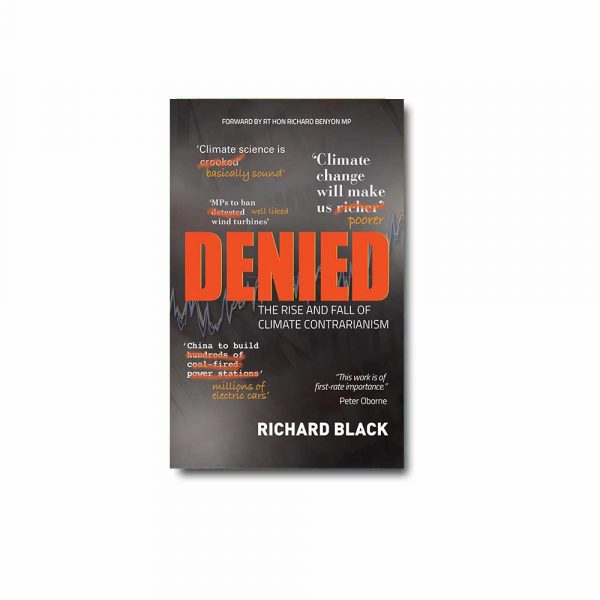 DENIED: THE RISE AND FALL OF CLIMATE CONTRARIANISM (print)

Climate change won’t be that serious…’ – ‘the lights will go out if we use renewable energy…’ – ‘climate science is bent…’. For a decade, contrarians controlled large swathes of the UK’s political and media discourse on energy and climate change. But their time is coming to an end. As the record for the warmest year gets broken time after time, the cost of clean energy tumbles and public support for tackling climate change stays high, the lights are indeed going out for Britain’s contrarian elite, in both politics and the media.

In Denied, the first book to take a serious look at the history of the UK’s climate contrarians, former BBC science and environment correspondent Richard Black outlines how they and their canonical arguments came to such prominence – and how they lost.

“This work is of first-rate importance because it exposes the climate change denial industry in all its moral horror. It should be read attentively – in particular, by climate denying politicians on the political right who have done so much damage.” Peter Oborne, Political Columnist, Daily Mail

“Richard Black brilliantly articulates what a spectacular waste of ink and intellectual energy the UK climate contrarian movement has been. This is the story of how some of the most well-connected, articulate, and arrogant men in Britain lost their long, pointless and ultimately dangerous battle with the evidence of man-made climate change. Beautifully told and thoroughly researched by Richard Black, an experienced journalist, and therefore a natural sceptic, who can spot BS when he sees it.” Tom Clarke, Science Editor, ITV News

“As one of thousands of British scientists working with the reality of climate change day by day, it’s been extraordinary and rather dispiriting to see the power and influence that a tiny number of elite contrarians has wielded in the media for so long – sowing misinformation, undermining what is beyond reasonable doubt, distorting public opinion, appealing to unreason and displaying irrational optimism. However; as Richard Black relates in this compelling account, when prejudice comes face-to-face with overwhelming evidence, there can be only one winner. Thankfully so, because the threat posed by climate change and the challenge of responding to it are far too great to allow serious, evidence-based discourse to be derailed by polemic.” Dr Emily Shuckburgh, Head of Data Science and Deputy Head of Polar Oceans, British Antarctic Survey

“This meticulously-researched demolition of the claims made by climate change contrarians should be the final nail in the coffin of their ill-founded arguments. Richard Black, one of the few people who both understands the detail of climate science and can write about it with crystal clarity, has written a brilliant analysis of how and why too much of the media fell for the contrarians’ claims and how, at last, the sheer strength of the evidence is consigning them to irrelevance.” Robin Lustig, journalist, former presenter of The World Tonight, BBC Radio Four

“With Trump in the White House, Bolsonaro in stewardship of the Amazon, and fossil fuel and car giants being seven out of the 10 wealthiest corporations, the people who stand in the way of solving the Earth’s climate crisis are in control of large parts of the globe. This isn’t just a battle of ideas. But ideas have been critical in shaping humanity’s response to climate change. Richard Black brilliantly exposes how the media has adopted tropes and framing conjured by climate deniers, contrarians and defeatists and used them to shape reporting. ’Denied’ is essential reading for everyone who believes stopping runaway climate change is the challenge of our time – and understands the centrality of the media in shaping public perceptions of the scale and urgency of the crisis and the credibility of solutions.” Liz Hutchins, Campaigns Director, Friends of the Earth