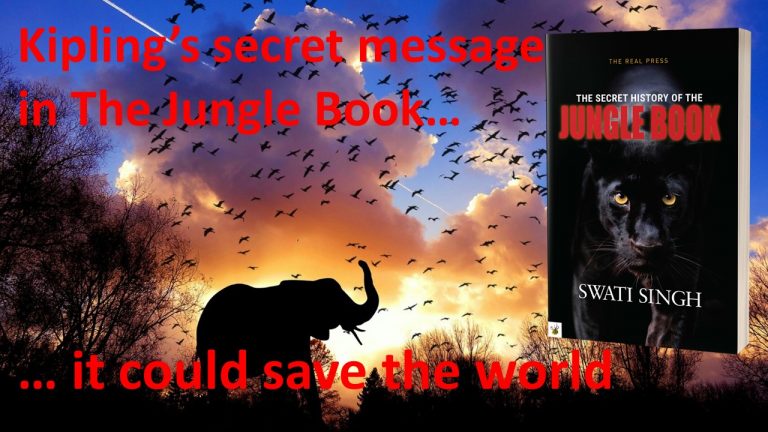 Swati Singh. author of The Secret History of the Jungle Book, writes:

From as long as memory serves me, I remember being a reader, a voracious reader of almost anything that I could lay my hands on. This love for reading was inculcated in a home where both my parents were continuously engaged in creative discussions on almost every topic under the sun. It also helped that, being something of an introvert, I always found the best company in books which faithfully transported me to a make-believe world where I could be a silent observer of life’s goings on.

My father, teaching English in the local college of the small town India I belong to, and a young mother determined to pursue her studies rudely cut short by early marriage and kids, meant that the atmosphere of my home was continuously charged with an environment of learning that only a fortunate few are blessed with. I was introduced to the classics of nineteenth century British literature at a very young age and read all that our personal library and the public library of my father’s college could offer. It was in these early circumstances of my life that the seeds of my writing were sown.

Kipling happened to me by accident. I was familiar with Kim as the only work by Kipling worth being read, a consequence of Kipling’s ‘imperial’ notoriety which banishes him completely from the Indian academic scene except in his one Indian novel which fetched him the Nobel for Literature. I had seen The Jungle Book, and not read it. It is important to consider this, as I discovered in the course of my work that The Jungle Book I had known was worlds apart from what Kipling had written.

When I took up my research I was actually keen on working on the women diaspora writers of India, a topic that has fascinated me with its living reality of the women in modern India. It was my excellent guide, Professor Joya Chakravarty (Dept. Of English, University of Rajasthan) who actually asked me to look back to the classics of British Literature and think of Rudyard Kipling. I must admit that I took up this writer a little hesitantly, unaware of the treasure trove of writing that was to overwhelm me.

In the course of my research I have been struck with the extremes of hostility and admiration that Kipling has inspired in his readers down the ages. It struck me as to how Kipling was being denounced on the one hand as a writer of the Empire and on the other hand being acclaimed as one of the greatest writers of children’s literature.

As I navigate through Kipling’s troubled legacy in my research, I remain aware that Kipling sadly remains forbidden territory still, and is yet to be discovered by a vast majority of our world. The magic of Kipling’s writing still remains in the shadows and the world loses out on one of the greatest story tellers of all times.

Through The Secret History of the Jungle Book, and in my own humble way, I attempt to reintroduce the writer and his most famous work to the lay reader as also to the student of literature with an alternative approach to the universal sensibility of Kipling’s writing. I believe the time is ripe to reintroduce Kipling to our academic institutions and to re-read him without the prejudices of the past. My purpose is served if my work inspires even a few people to take up and read Rudyard Kipling once again.

You can buy The Secret History of the Jungle Book for kindle here. and in paperback here.